What is the first thing that pops into your head when I say Jammu & Kashmir?

Now let’s isolate the two. What pops into mind when I say Jammu?

…A place to pig on Rajma-Chawal enroute to Vaishno Devi?

You’re probably struggling to form a mental picture here. You’re not the only one.

Let’s see, you’ve probably passed through the area to reach Leh. Or maybe Srinagar. Either way, you’ve probably not had a real chance to explore or form an opinion of the place. And since there’s never been much of a sale, you haven’t bought into the idea of visiting Jammu, for itself.

So by the looks of it, when I say Jammu, you probably say ‘Meh’. And chances are, you’re not jumping out of the bed/couch/anti-fit office chair with excitement to read about it either.

So let’s change your mind. Because let’s face it. That’s why you’re here 🙂

But first, a Disclaimer: This is a post about Jammu City and it’s superlative gastronomic possibilities. Ergo, this post is NOT about Kashmiri Wazwan NOR about Ladakhi Momos and most certainly not about ‘Chinese’ food (shudder).

So loosen up the belt by a few notches, get yourself another hot chocolate, close the Tripadvisor & clone tabs and let’s initiate the process to blow your mind.

Do you remember a time before all our cities looked like clones of each other? The time Delhi or Mumbai office hubs didn’t look like glass building zombie lands from a post-apocalyptic era. Or a time when people shopped on the streets instead of jamming up mall lots? Or a time when our airports felt a part of the cityscape instead of looking like McDonald franchises. Jammu is that time for you. The city you grew up in but now can’t recognize. The Ex.

Quaint streets, lively bazaars dressed up for even the tiniest festivities, inviting aromas of fresh food luring you in. Old homes lining up the old palace complex that look like they’ve witnessed centuries.

And people who don’t honk at you on the streets. Who invite you home for tea. And who sometimes take over a public park to communally curate a special winter garden. When was the last time you walked into an unknown city and were offered stories with a steaming hot cuppa?

Jammu’s (somehow) managed to hold on to its character like cheese to macaroni. It’s chaotic, charming and far away from madding tourist crowds. 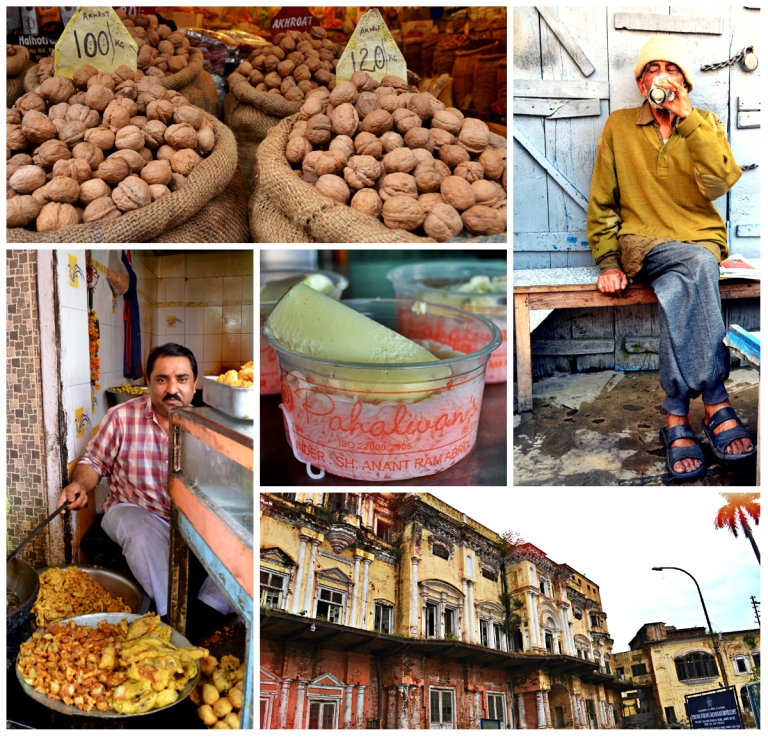 Clockwise: Almost every second shop in the market is a walnut seller, an old man drinks sugarcane juice, the famous Pahalwan Kulfi, Ruins of the old palace and a famous pakoras (fritters) stall

Food for the soul

Let’s talk about what we’re really here for: Food.

The local food is predominantly Dogri, the original inhabitants of Jammu. The cuisine (like the people) is simple but packs a mean punch. The vegetarians feast on lentils and seasonal vegetables with a special love for a pumpkin preparation called Auriya/ambal and north India’s culinary star: sarson ka saag & makki ki roti.

With dairy and dry fruits, Dogris believe in going big or going home. Extensive use of clarified butter, yogurt & cream for frying, sautéing and serving. Almonds, walnuts and cashews feature in lentil curries and desserts. The food is not too heavy on spices, but relies on the Anardana to add that touch of razzmatazz.

While a true blue Jammu local will tell you the best Dogri food is what his mother makes, the other place (and probably the only) to tuck into local favourites is the Swastik Hotel’s ‘Sri Krishna Bhog’, which takes great pride in using traditional recipes and methods of cooking.

My favorites are Dal Madra (black gram cooked with dry fruits) and of course the ubiquitous ‘Rajma-Chawal’ which I am told is a regular Sunday feature at most homes. Finally, end (or start) your meal with the humble, but delightfully rich Kurre which is topped with sugar and is served traditionally as a welcome snack to the groom as he reaches his wedding. What a sweet reason for a guy to show up at his own wedding.

A plateful of Kurre served with a sprinkling of sugar

I am not very religious but I do believe in the god of small things. Especially in hot Pakoras served with perfectly julienned salad, which will reinstate your faith in heaven. And if you’re a gastronomy devout, the streets of Jammu are full of corners serving nirvana in tiny leaf bowls. Get ready to sing hymns of praise to fresh chole bhature, aloo tikkis, a variety of kulchas, namkeens, kulfis and giant glasses of lassi to wash it all down.

But the two guys peddling the most divine bites have got to be the much loved Girdhari Kachaluwala & a nameless shop selling Pakoras.

A fresh and hot portion of assorted pakoras

‘Bhallewale ki dukaan’ at the Parade Market is best known for its giant bhalla pakoras (similar to Delhi’s famous moong pakoras). Pakoras are (usually) vegetable fritters coated with a spicy gram flour batter. This little shop makes 10 types of pakoras ranging from the ususal suspects – potato, onion & cauliflower to the slightly unusual (but incredibly delicious) aubergine and spinach. All pakoras are served with finely sliced radish and enough spicy chutney (sauce) to fill every little void in your life.

The man who runs the shop is as generous as his chutney helpings, and is known to possess superpowers that include wielding a giant frying spoon and a special ability to convince you to try all the pakoras at his shop.

And I promise, you’ll finally know what Lays meant when it coined the famous campaign: No one can eat just one.

Girdhari Kachaluwala’s story is as interesting as the sauces that marinate his famous kachalu. What began as a popular street snack sold in a giant thaal (platter) progressed to a Redi (cart used by hawkers) and eventually upgraded into a full-fledged restaurant catering to the whims of the young & nostalgia of the old.

Even as the third generation of the family gears up to take the reins of this mini institution, the recipe (I am told) remains the same to date. Kachalu is made of sweet potato and is served in a spicy sauce packed with flavor. Think salty, sweet, sour and spicy all rolled into one balanced bowlful.

Special mention to Singh Di Hatti which makes amazing digestives (you’ll be needing plenty) Sixty something year old Mr Singh fled from Pakistan as a young boy and made Jammu his home. Today he runs this unassuming little corner shop that makes the most popular churan (digestives) in the city. His special blend of spices like cumin & fennel combined with jaggery and rock salt boasts of aiding digestion, helping the stomach resolve its internal politics and even increase appetite for the strange species of poor eaters.

Apart from the special churan, his aam papad is uniquely midway of the usual flavor spectrum (sweet-sour) Fair warning, Mr Singh’s stories and aam papad are both terribly addictive. 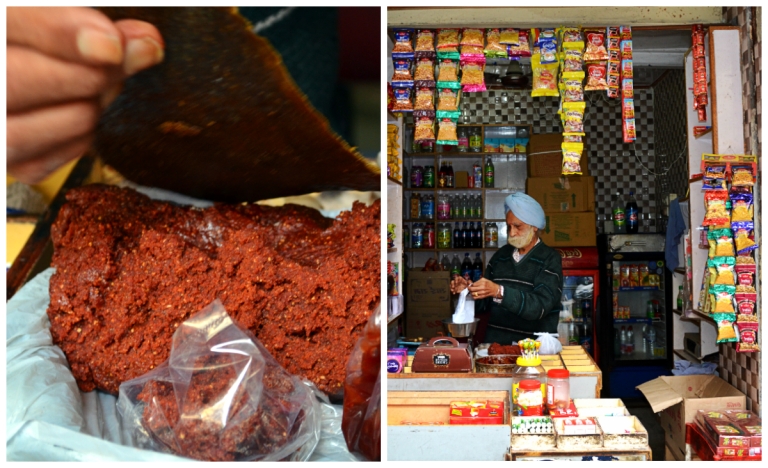 Jammu is much like a feel good/multi-star cast/just around Valentine’s Day kinda film.

Like ‘Love Actually’, where you’re falling in love with food actually.

And in this film, there’s something for every kind of romantic. Including the meat lover’s.

Let’s take a moment to thank the noble Dogri Rajput men and women for their contribution to fine food, and in this case a spectacular lamb curry that will create pandemonium in the life you’ve led so far– thy fair knight (in this case dark) is called Khatta Meat. 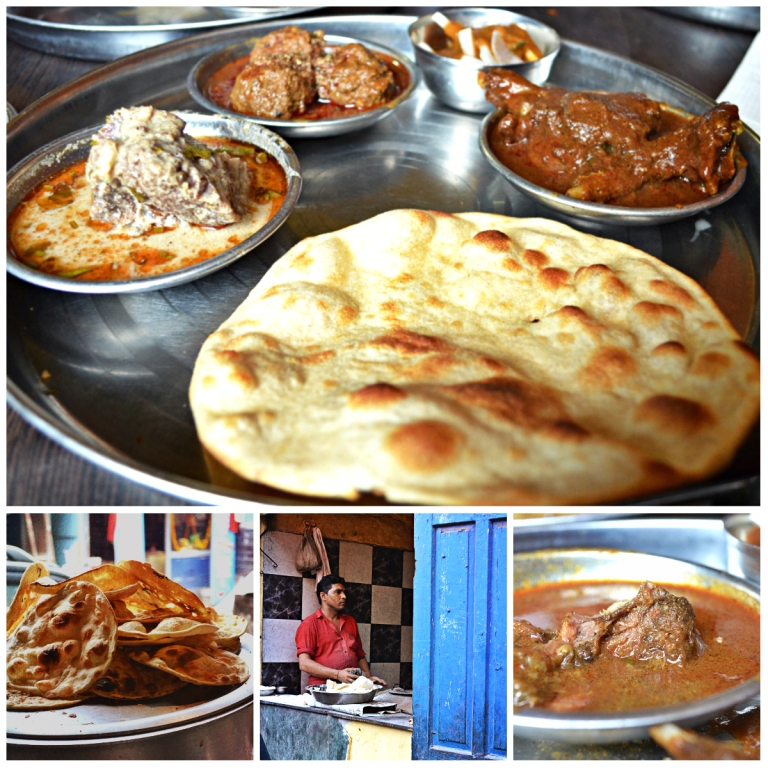 Clockwise: A typical thali at the dhaba (from L-R) mutton yakhni, kofte & rogan josh. A pile of fresh tandoori rotis, the roti maker through the dhaba’s window and a bowl of khatta meat

One such place is Paras Ram Dhaba which bears the torch for all things meaty, succulent and sexy. Despite being three generations old, the recipes and ingredients haven’t changed or aged. Infact they’ve only become more relevant over time. A great pit stop for the hungry and saucy, this is a no fuss, finger-lickin good gravy spot for rogan josh, yakhni, kaleji and special chicken pickle, best enjoyed over piles of hot tandoori rotis. They owe the trademark colour and khatta or sour flavor and to anardana and believe it or not, this recipe dates back to the 40s!

Native to the region and surrounding areas (it’s called maish krej in Kashmir) the Kalari is dense and has a soured-smokey flavor that gives it a distinct personality over its fairly insipid cousin. It’s usually fried in oil or clarified butter and takes well to chilli, garlic and even cilantro.

Even though the process to make both paneer and kalari is similar, the latter is treated more like cheese and is usually served between bread or kulchas. 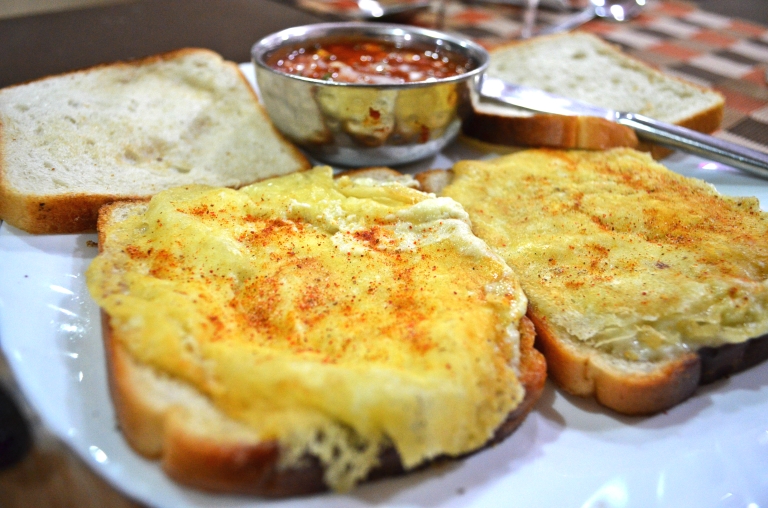 The versatility of Kalari makes it as individual as a Gouda, and as much of a team player as Cheddar. Which gives it ample scope to feature in Indian curries, daring desserts, hungover breakfasts or even a ladylike cheese platter.

However, if you’re like me and are caught daydreaming of bacon atleast twice a day, then I would recommend a winning combination that will satiate your every craving.

Epic-ly proportioned and free of ‘guilt-free’, this gentle giant is your best friend on a bad hangover or when you feel like unleashing the most ill-mannered dude within you.

The best part – it’s incredibly easy to put together with just a handful of ingredients. However, the real ‘sex on toast’ factor has got to be the kalari. 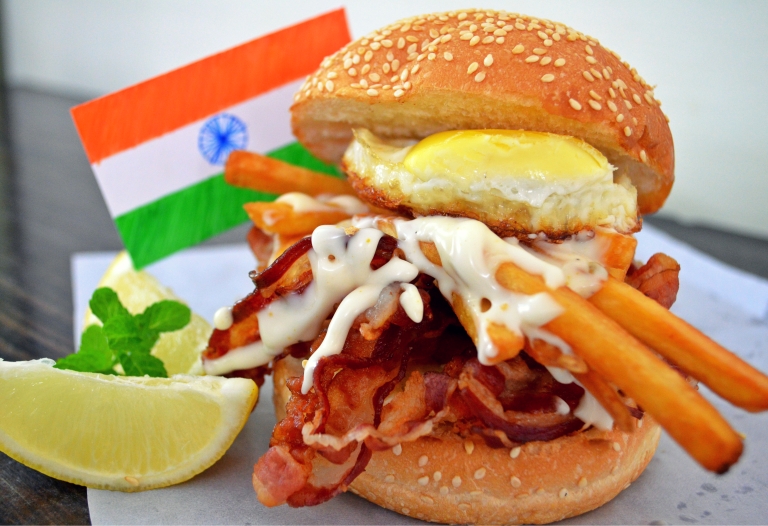 Tasting notes : Eggs, bacon & fries paired with a smokey cheese and topped with garlic aioli for good measure. Easy-peasy and baconeezy. I would strongly recommend placing the cheese closest to the bread and topping it with bacon for maximum flavor. Happy Gluttoning!

– Bacon : As much as your heart desires

– French Fries : About a handful

– Fill a medium sized frying pan with oil up to half its capacity and place it on heat.

– Start with the prep : Fry the bacon and use some of the fat to fry the egg (I used this method to fry a perfectly shaped one) You can also toast the burger buns in the same pan.

– Use a cookie cutter to cut the cheese to match the shape of the bun.

– Once the oil’s hot, add the french fries and fry them until golden brown. If you’d like to make it extra crunchy like I did, pull out the fries when they start browning and then fry them again till golden and crisp. Add seasoning as required.

– Assembly : Place the burger base on a platter and top with the slices of cheese. Pile up the bacon into a mini mountain and balance the french fries on top. Spoon the garlic aioli on this and watch it drizzle down the sides. Finally, carefully place the fried egg on top and close the bun with its top.

And if you manage to fit it all in your mouth, I’d like to hear from you!

All Images by Ishita Thakur

16 thoughts on “Move over Rajma, there’s a new (old) Boss in Jammu Town”